OUR PRODUCTS ARE IN HIGH DEMAND, AND A NEW MISSISSIPPI FACILITY PROVIDES A STRATEGIC ADVANTAGE THAT WILL BENEFIT OUR CUSTOMERS AND EXTENSIVE DEALER NETWORK...

"We are thrilled to be working with the team from Booneville, Prentiss County, and the state of Mississippi who have already made us feel at home," said New Way CEO Mike McLaughlin.

New Way plans to start operations within the next three months. Once operational, the company will begin manufacturing its Cobra™ and Viper™ rear loaders with other products to follow. New fabrication equipment is being scheduled for delivery and installation at the new site.

"Our products are in high demand, and a new Mississippi facility provides a strategic advantage that will benefit our customers and extensive distributor network," said New Way Trucks Executive Vice President Johnathon McLaughlin. "A fourth manufacturing facility will allow New Way to establish a new industry standard in efficient, time-critical solid waste equipment deliveries meeting the demand of our dealers and end-users."

The site was selected for its ability to meet several needs of the company. The Booneville facility is essentially move-in-ready and met capability requirements with overhead cranes, lighting, and sufficient power. Boasting 40 acres of land, there is room for on-site expansion if needed. Workforce availability was another determining factor in the final decision. New Way will begin the hiring process soon, with job listings being posted on the company's website. The refuse truck manufacturer has also partnered up with the local job networks and Northeast Mississippi Community College to recruit top talent in the area.

MDA and the State of Mississippi have been supportive throughout the entire process by assisting New Way Trucks in achieving its expansion goals.

"The addition of New Way Trucks to the Booneville business community shows industry leaders around the country that Mississippi is the place where manufacturing companies seeking a top-notch, skilled workforce and supportive business environment can expect to enjoy years of growth and success," Gov. Phil Bryant said. "Leaders at the state and local levels are dedicated to strengthening communities through economic growth, as evidenced by New Way's commitment to create 100 jobs in Prentiss County."

We celebrated National Employee Appreciation Day with a catered meal. Our team has continued to do phenomenal work at every turn in what has been an unexpected year. This meal is just a small token of our appreciation! 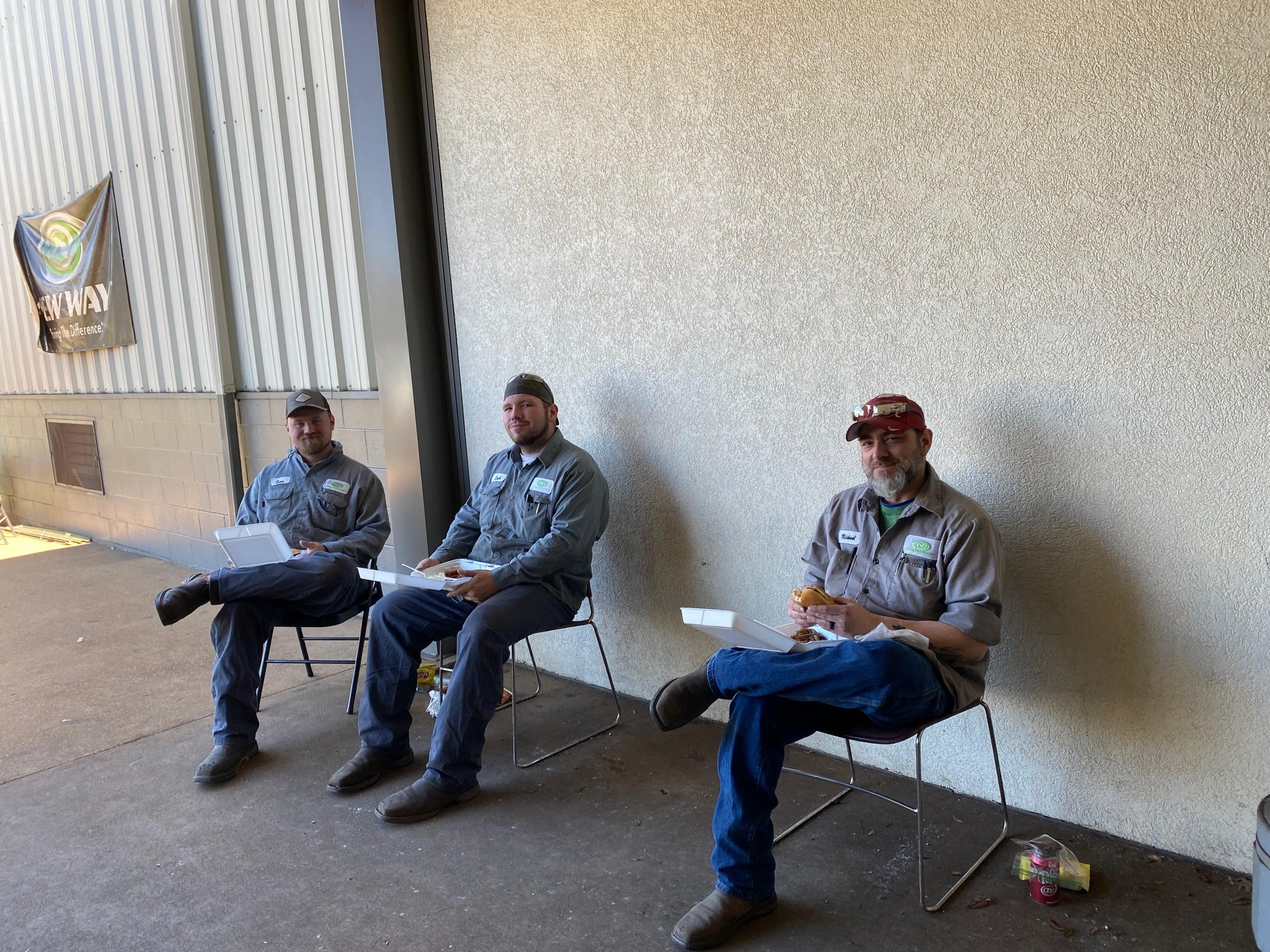 The first welding arc was struck at 1 Wolverine Drive a year ago today! Since then we’ve received numerous accolades, provided vital support in the wake of Scranton’s February plant fire, become a pillar of our community, stayed nimble during the pandemic, and grown our employee family to over 130 members strong. We’re excited for what the coming year has in store!

Although we’re unable to celebrate the holidays like we traditionally do, we brough holiday cheer to all McLaughlin Family Companies locations in the form of games, prizes (including cash), and Christmas cards for every member of our employee family. Booneville’s big winners are pictured below! 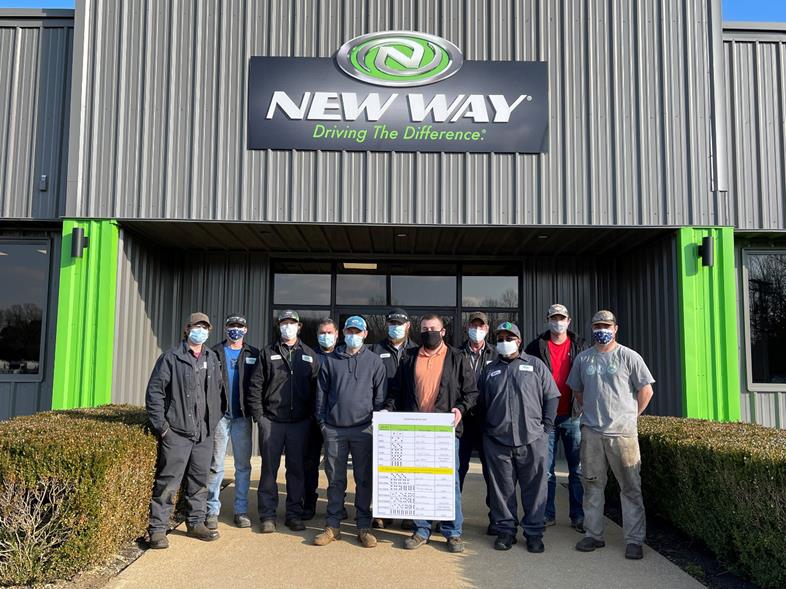 When we first announced Project Wolverine more than a year ago, we initially planned to onboard one-hundred employees by some point in early 2021. The manufacturing facility opened in January and has been abuzz with activity ever since. While the world has thrown us all quite the curveball, our team in Booneville now exceeds 125 members, and hiring continues!

We are thrilled to announce that the New Way family in Northeast Mississippi is now over 100 members strong! We remain firmly committed to further expansion in Booneville and look forward to what the future holds as we continue to grow.

Readers of the Booneville Banner Independent voted New Way Trucks Prentiss County's Best new Business in the publication's annual Readers' Choice Awards. It is just the latest recognition we have received for our work in Prentiss County.

Our team in Northeast Mississippi continues to do phenomenal work. Cobras are rolling off the production line each day, and Sidewinder bodies have been completed and have begun mounting (pictured). Additionally, we are now up to nearly 100 employees at the Booneville facility. 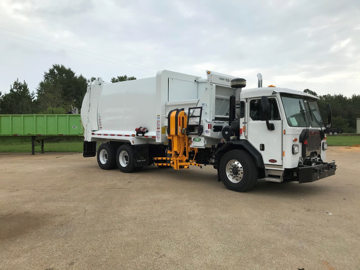 On May 13th, New Way celebrated our first 100 percent Mississippi Made Cobra in Booneville. This truck, completed in March, marks the first truck manufactured using components entirely sourced from the Booneville plant. Up to that point, trucks on the Cobra and Viper line included a combination of parts and components from our facilities in Iowa. 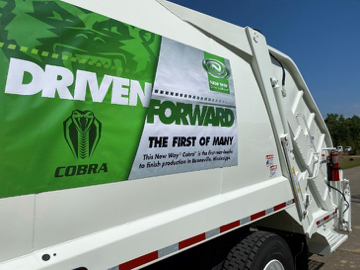 New Way is happy to report that both the Cobra/Viper rear-load and Sidewinder XTR ASL lines are online. Our operational and production rates continue to increase. In addition:

Since the manufacturing facility in Booneville opened in January, there has been no shortage of excitement. Job applications continue to pour in, and the Cobra/Viper production line is fully operational as new units have begun rolling out. The Sidewinder line should be up and running soon: it's scheduled to come online in April.

We'd also like to extend a massive thank you to our newest members of the New Way family in Booneville on this Employee...

It has been just over a month since the first welding arc was struck in Booneville, and we're off to a great start; in fact, progress continues as the first units near completion. Our team continues to train new hires at our headquarters in Scranton before sending them down to begin work at 1 Wolverine Drive. To date, we have rotated 45 employees through Scranton for training. Production on our Cobra™ and Viper™ rear-loaders is humming along; the production of our stock Sidewinder XTR™ ASLs will begin in the next 30 to 60 days.

A few recent developments include:

Project Wolverine is shifting into high gear. Every day, we are making strides in preparing the Booneville, Mississippi, facility for production and educating new employees on production processes. Groups of Booneville welders, engineers, and hydraulics specialists are being trained in Scranton, Iowa, for both Cobra and Sidewinder product lines. On-site, we have reached the following milestones:

On December 3-5, New Way hosted a hiring fair and initial round of interviews at our new plant in Booneville, Mississippi. We're now standing at over 680 applications for 100 job openings. The building continues to be prepped, and equipment shipments remain a constant. The first round of job offers have been extended, and new hires will initially travel to Iowa to receive two weeks of robust on-the-job training from our current employees. Production is slated to begin in January.